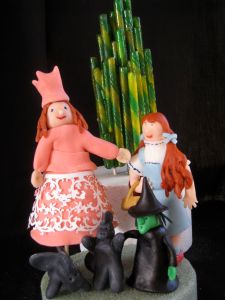 A cake with a twist: Perryville woman will
create ‘Wizard of Oz’ for Lexington
celebration
By EMILY TOADVINE
emily@amnews.com
Who better to make a cake depicting one of the most famous
twisters than a Twisted Sifter?
When asked to make a cake for a contest to celebrate the
Lexington Children’s Theatre’s 70th anniversary, Pam Birt of
Perryville, who named her business The Twisted Sifter,
couldn’t resist choosing “The Wizard of Oz” theme.
“It’s one of the first movies I ever saw,” says Birt, who plans
for her cake to depict several scenes from the 1939 movie in
which a schoolgirl is transported to the Land of Oz.
“On the board we actually have the tornado, the upside-down
house with the witches’ legs sticking out with the slippers on
and have the start of the yellow brick road. It will come around and swirl around the whole cake.”
Cindy Simmons, also of Perryville, will be helping as she often
does with the bigger projects.
To gear up for the project, Birt watched the movie three times
in the last week. They constantly check the movie for details.
One of the problems Birt had to solve was creating the Emerald City.
“We finally came up with using old-fashioned candy sticks because they’re kind of clear.” Birt says she was asked to participate in the cake baking contest when one of the organizers, Grace Gorrell, found her shop online and asked her. Bakers had the option of choosing from among the many plays performed at the theater during its 70 years. The cake will be created for a contest Saturday to celebrate the 70th anniversary of Lexington Children’s Theatre.
“I saw the list and immediately went right to the ‘Wizard of Oz.’ I thought it would be so much fun to be able to create all those characters.”
Since opening the Twisted Sifter in November 2008, Birt says she has made at least 50 cakes, but she made many more before she moved from Arizona with her husband, Nick, for his job. This is her first contest and she
is rounding up a group of friends to attend and vote for her entry.
Birt expected to work into the wee hours to create the cake. She doesn’t work too far ahead because she likes to use the freshest ingredients including organic eggs, Amish butter and fresh, locally grown fruit when
available. Her devotion to using fresh fruit has backfired.
“I had poison ivy from my ankles onto the cheeks of my face from picking blackberries.”
In addition to Simmons’ help, Birt says her 5-year-old daughter Chloe offers her assistance, but she often finds the icing too tempting.
“The food coloring is all over her lips.”
Check Birt’s work out on her Web site at http://www.thetwistedsifter.com.
EDITIONS
***
2009-04-17
If you go: 2009-04-16
2009-04-15
2009-04-14
The 70th anniversary party for the Lexington Children’s Theatre is 11 a.m. to 2 p.m. Saturday at Joseph-Beth
2009-04-13
Booksellers in Lexington Green.
2009-04-12
2009-04-10
Cakes will be decorated by bakeries and pastry chefs in the style of favorite LCT shows.
2009-04-09
2009-04-08
Cakes based on popular children’s books seen on LCT’s stage, will be available for a silent auction.
2009-04-07
For a donation of $5 kids and families will receive a cake judging ballot as well as the opportunity to sample
ARCHIVES
cake from all participating bakeries.
Children receive a free craft, compliments of The Mad Potter. They can paint their own mouse to commemorate
the popular children’s book, “If You Give a Mouse a Cookie.”
Search
All proceeds benefit LCT’s annual campaign.
· Advanced Search
Copyright:The Advocate-Messenger 2009